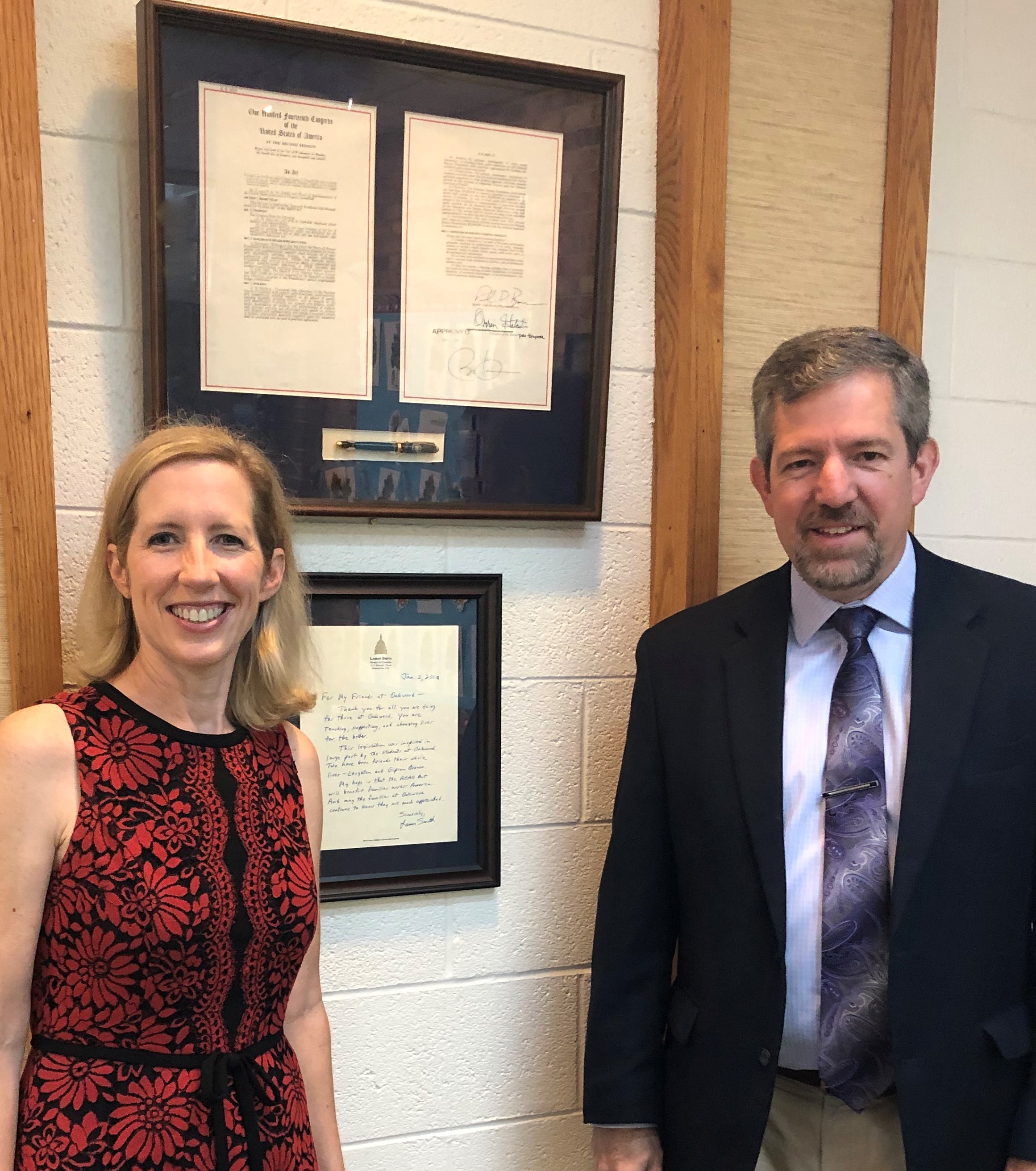 On January 2, 2019 Congressman Lamar Smith sent a hand-written personal letter to “My Friends at Oakwood” in which he said, “you are teaching, supporting, and changing lives for the better.”

The Congressman was Chairman of the Science Committee in the U.S. House of Representatives.   Over a period of more than a year his Committee and the Dyslexia Caucus, which includes the House and the Senate, heard from experts on how research in the area of neuroscience has led to more practical ways to better diagnose and deal with dyslexia.  The law that was passed unanimously in March of 2016 is named the READ ACT.  Some members of the Caucus, including Rep. Smith and Senator Bill Cassidy (a former Oakwood parent), personally and professionally know Oakwood students, faculty, and families.  The Congressman wrote: “This legislation was inspired in large part by the students at Oakwood.”  See in the Oakwood lobby a framed copy of the READ Act which was personally hung there by Oakwood Mom Jennifer Brown, formerly Rep. Smith’s Chief of Staff.

Dyslexia is a language-based learning disability which is estimated to affect at least 8.5 million U.S. school children, and up to 20% of all Americans, including many Oakwood students.  Oakwood School faculty members were among those experts speaking at a luncheon for the congressional Dyslexia Caucus.

As early as the 1970's Congress has passed and amended laws to keep up with advances in the Science of Learning and Reading.  The evolution of those laws has come to include, require, and support the education of students of average to gifted potential with learning disabilities, including reading disabilities, such as Dyslexia.

In April 2018 the International Dyslexia Association [IDA] published research titled “The Dyslexia Dilemma: The Role of Colleges of Education.”  [see IDA website] Authors of that research found and report that, in spite of advances in the neuroscience of learning, in U.S. colleges for teacher training “There is a gulf of knowledge between the science and the practice” of teaching students to read.  Research by the National Council of Teacher Quality reports that “nearly 80% of elementary education teacher training programs received scores of ‘O’s’,” in providing course work in strategies for teaching struggling readers.

When Oakwood School was founded almost 50 years ago by professional educators, we recognized that even most State certified special education teachers did not have sufficient training or knowledge to provide needed remediation and compensation for bright students with neurologically based learning differences.  From the first day of classes at Oakwood in 1971 we began to provide our state certified teachers with additional in-service training based on the level of scientific research and knowledge available at that time. Dr. Wretha Peterson joined our team of Oakwood founders and helped set the pace that Oakwood maintains 5 decades later, regularly providing advanced in-service training for faculty with the goal of engaging and nurturing the students to help them discover, record, and use their own one-of-a-kind individual, personal strategies for learning.  Students graduate from Oakwood Middle School with a large notebook of their individualized strategies that will make them more successful throughout their future education, careers, and lives.  We are pleased and grateful to know that members of Congress were inspired by Oakwood students of today to take federal and state legislation to the next level in educating students with different learning styles.

Dr. Guinevere Eden, a neuro-scientist and the head of a department on the faculty of Georgetown University graduate school of scientific research, in collaboration with Oakwood, has said to our parent group: “With MRI’s we can tell you how the individual brain of an LD student differs from the brain of a non-LD student, but, as scientists, we can’t tell you what to do about educating that student.   Oakwood School can!”

Dr.  Bennet Shaywitz, a Pediatric Neurologist, and Dr. Sally Shaywitz, a Developmental Pediatrician, both on the faculty of Yale University Medical School, have spent quality time observing and interviewing Oakwood students, administration, faculty and parents.   Dr. Sally, speaking to Oakwood parents and visiting professionals said, “We have spent years visiting and observing schools and programs for LD students, and we can tell you we have never seen another school that ‘puts it all together’ for the child who learns differently like Oakwood does.”  Dr. Sally is a best-selling author of a comprehensive book on “Learning Disabilities”.

Oakwood School’s Mission, since 1971 Is and Has Been: Transforming Lives, Realizing Possibilities.

Oakwood School will open 2 hours late today, Tuesday, January 26, at 10:30 AM due to possible icy conditions.